kitchen \kich- ɘn\ n. 1: a place (as a room) with cooking facilities. 2: a [shameful] place at a black woman’s nape that houses her naps; resistant to heat. See also buckshot and beedy bees.

Three summers ago, I had a Do the Right Thing moment. It was a sweltering Saturday afternoon, and I was driving back home from Juliano’s, my favorite raw food restaurant in Santa Monica. Sweat leaked down the sides of my face. My halter clung to me like a needy kid, and I was irritable. Even the maca iced coffee that I had recently chugged down couldn’t cool off my emotions. Like Mookie, the ne’er-do-well pizza delivery guy from Spike Lee’s epic flick, I was certain the triple-digit heat would force me to do something radical.

Stuck in traffic on the 405 freeway and listening to Mary J.’s womanist anthem “Just Fine,” I fingered my kitchen, the snarl of hair at my nape. Although I secretly preferred this kinky texture to my straightened, highlighted bob, like most black women with processed coifs, this area was often kept hidden, a deep source of personal shame if someone rolled up on you from behind and saw your buckshot on display.

I had been thinking about my mane a lot. Even though I was on an every-two-weeks schedule with my hairdresser, the flurry of flat irons, blow dryers and spritz, and the results they produced — kink-free tresses — didn’t bring me as much joy as they once did.

For colored girls who have considered peroxide …
When I met with my stylist a month previously, we laid out my look for the summer. She would give me a cute short cut and then highlight the hell out of it. I was thinking in advance of the praise I would receive for my bold new look — how the multi-hued ‘do would compliment my features — and the color-coordinated outfits and accessories I would rock with my new style. But I couldn’t shake the unease I felt about going through with the plan. Every subsequent visit to the salon found me putting off the peroxide. My hair had been growing out for a month, and I was reluctant to maintain my highlights. Dare I say it didn’t feel natural?

Deep down, I didn’t want my mane to become my identity. Although I liked the attention my tri-colored bob drew from folks in the organic market and random shoppers at the mall, I felt weighed down by my hair. As summer approached and temperatures climbed, my social life retracted. The slightest bit of moisture could wreck my pressed coif. Invites to the beach were reluctantly accepted, swimming was a no-no, bikram yoga was definitely out. Even exercise was limited for fear of jacking up my edges and incurring the knotty wrath of my kitchen. 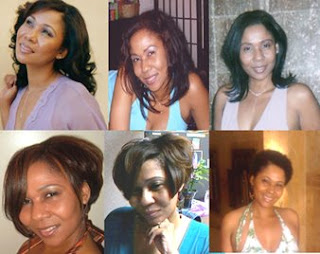 A radical idea was budding. I would cut my hair. Off. All the color out of it. I would rock a natural hairstyle, free of chemicals, preservatives, BHT and Yellow #5. Immediately after I had that thought, fear gripped me. I couldn’t chop off my hair. I lived in L.A., the yaki capital of the U.S., where long hair is privileged and straight hair is queen. Eleven years of living in this town have shown me that most people judge you on appearance alone. With natural hair, folks would no longer think I was cute. Brothers wouldn’t look at me three ways. Beckies would pet my hair as if I were a caged animal on display at Universoul Circus.

Reluctant revolutionary
I was still stuck in a sea of chrome and brake lights, humming along to Mary J. and trying to figure out the future of my locks. Short cut and highlights? Shorn like Audre Lorde? What was a diva to do?

I’m conscious … for the most part. I realize that natural hair is a form of resistance to accepted standards of beauty, a smack in the face to the weaves and extensions that were blowing past me on the 405 freeway from convertibles and through the windows of SUVs. Unprocessed hair is also a form of self-love, a way of saying, “Yes, I accept and embrace my kitchen, in all its kinky glory. I am black and beautiful.”

And yet the most pressing (no pun intended) decision on my mind was this: How could I rock a natural look and still preserve my flyness? In my mind, unprocessed hair was reserved for revolutionaries, and even though I’m down with Fanon and bell hooks and listen to Pacifica radio on the daily, I wasn’t ready to trade in my designer duds for kente cloth and cowrie shells.

Like Mookie, I had a decision to make. I couldn’t deny that I felt oppressed by my tresses. I didn’t feel fully self-actualized with my current state of hair. Besides, it was hot as hell, and I wanted to get in the water without worrying about my locks for once.

Like Mookie, I was a reluctant revolutionary on the threshold of enlarging my consciousness. I envisioned Spike Lee’s character on the cusp of such a decision. He was an average Joe, an affable baby daddy with a one track mind — to get paid. But a sizzling New York day brought out his inner militant. I pictured him in the scene outside Sal’s pizza parlor, Radio Raheem dead at his feet, white racist cops behind him trying to restrain the growing black tribe of protesters. I saw this common pizza delivery cat picking up a trash can, and with an angry warrior cry of “Radio!” smashing the plate glass window of his oppression, jaggedly enlarging the margins of his existence.

I too am just an average chick with a one-track mind — a desire to succeed as a writer in the sunny jungle of La La Land. But the heat — external and internal — radicalized me. I’d been wearing my hair straightened or chemically processed since I was eleven, the victim of a failed kiddie perm. It was time to change the paradigm.  I would cut my hair off, and I would still be fly, Ntozake Shange for the Sex and the City crowd. I saw the nappy goddess in me and loved her fiercely.

Kitchen liberation politics
By the time I exited the freeway a few miles from my apartment, my mind was made up. My hair would be three or more inches shorter before sunset. As if further confirming my decision, I saw a peculiar sign outside my neighborhood church. Every week, the marquee in front of the building featured a new message, and that week’s motto was: “Let’s go swimming.” It was as if the Almighty was saying, “Just do it already. Sheesh!”

As soon as I stepped into my apartment, I changed clothes, washed my hair and grabbed a pair of scissors. But uncertainty was a clenched fist in my chest. Even though the ends of my mane were dry and damaged from years of highlights and press ‘n curls, I was hesitant to part with those dead strands. I would be severing myself from an identity that I had held onto for so long, one that was privileged and cherished.

But my kitchen was begging for liberation and defiantly so. The day’s heat had morphed the hair at my nape into a baby afro. I was already halfway through the process. Why not just hack off the dead hair and let my new, revitalized self emerge?

Lady in the Water
The next day, I threw on a swimsuit under my sun dress and headed to Santa Monica beach. In the ten years that I’ve lived in Los Angeles, I can count the times that I’ve visited this particular body of water, or Venice Beach or Malibu, on both hands. But I was on a mission to submerge myself.

The shore was filled with sun seekers, kite-flying kids and couples getting their PDA on on a beach towel. I found a spot on the sand next to a woman engrossed in a novel. After asking her to watch my bag, I headed to the water’s edge, unafraid this time. I splashed handfuls of the Pacific Ocean on my upper body, getting acclimated to the cold temperature. In the distance, surfers rode a massive wave, whooping with delight. I rushed to meet it, and the briny breaker washed over me, baptizing me into my new life.

I stood in the ocean for a while, watching seagulls lazily circling overhead, gazing at the mountains sloping in the hazy distance. Not only would I be a fly girl with a natural ‘do, I would also become a beach bum. I would make the trek to Malibu next weekend. Whichever shore I selected, I knew I wouldn’t have to worry about my kitchen. My kinks were on display for the world to see, and for once, I was unashamed. I knew I had done the right thing.